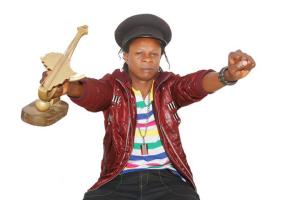 BIOGRAPHY:
The emergence of King Wadada on the music scene in Nigeria marked a decisive turning point in an era that has witnessed a dearth of authentic music. His kind of music shows a pristine stylistic performance pattern, very original and different from the rest musical style that is now a common stance in the industry. His Ntambala Reggae Music is sort of harmonious blend and kind of unique music that is delightful and meaningful to the audience.

King Wadada’s mode of costumes exhibits a typical “Moses Garment”, his sandals and neck chain that he uses when coming on stage with his long flamboyant dreadlock exhibits the typical prophets of God. These are setting elements about his music and performance that stand him out as a rare musician of non-conformist type with the modern day Soul-less music genre.

THE ARTIST:
King Wadada hail from Orhionmwon Local Government Area of Edo State of Nigeria, specifically Urhonigbe Town. He was born on 6th of August 1975 in Benin City, Edo State. He attended Niger College, Benin city and passed out successfully before he switched into the music world.

HIS ART:
King Wadada is music personified. He believes in making people learn from his experience in life coupled with the lesson learnt from the word of God. He likes to express himself in a way that his lyrics benefits the generation of children yet to be born. King Wadada graduated to mastering the rudiments of musicianship as a vocalist and a guitarist, top-rated Nigeria Artistes. He is no doubt sufficiently equipped to climb to the very top of the world music chart.

INSTRUMENT:
He loves to play the Guitar and Conga, a producer, a songwriter in fact multi-instrumentalist.

SHOW CASE:
Within the short period of his entrance into the music scene with his own brand of Reggae music called NTAMBALA ROOT ROCK REGGAE which means African Spiritual Reggae Music. King Wadada had featured prominently in several concerts and festivals at both National and International Levels. Among them are:
– 2004 September, Live performance with Wyclef Jean at the Guiness International Concert, Shell Club Port-Harcourt, 2006 Felebration Concert King Wadada alongside with Lucky Dube, Femi Anikulapokuti e.t.c.

– Won the National Encomium Magazine (Amen Award) as the Best Reggae Artist for the year 2000/2002.

– Won Kora Award as Best Reggae Artist in Africa in the category of Best Reggae or Group 2010.
– King Wadada was awarded a Certificate of Appreciation in recognition of his contribution towards making the 2010 US Consulate General a success after live performance in Colonade Hotel with US Embassy Crew.

– Award of honour by Faculty of Environmental Studies University of Uyo Nigeria 2010.

SERVICE TO HUMANITY:
King Wadada is a disciple of Jesus Christ and a Philanthropist. He said in his vintage self that until the whole world repent from their sins accept Jesus Christ as their personal Lord and Savior in the right way and at the right time, he will not cut his hair, and neither will he remove the chain from his neck.

ALBUM CATALOGUE:
The catalogue consists of three albums including his current album. Highlighted below between first and second is the previously released album followed by the current album.

2. The second album titled “If Men Were God” was released in the year 2004 alongside eight tracks.

3. The third album titled “Omnipotent God”, which is yet to be released with thirteen tracks.